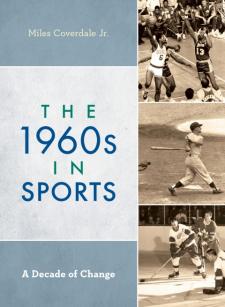 This book includes the most significant sporting events of the 1960s, covering all the moments that generated tremendous growth in professional and college sports in America during this decade. It features stories such as Roger Maris breaking Babe Ruth’s home run record, Wilt Chamberlain scoring 100 points, and Muhammad Ali beating Sonny Liston. Sports became a national obsession in the 1960s as people tuned in on their new televisions to watch the exploits of some of the most legendary athletes and teams in history. It was the decade of Mickey Mantle, Jim Brown, Bill Russell, Bobby Hull, and Arnold Palmer, the decade when the Celtics dominated basketball, Joe Namath delivered on his Super Bowl guarantee, and the Miracle Mets won the World Series. In The 1960s in Sports: A Decade of Change, Miles Coverdale looks back at what was arguably the greatest decade in sports history, when the sports world of today began to take shape during a very tumultuous period of American history. At the start of the decade, thirteen years after Jackie Robinson broke the color barrier in baseball, major league rosters were still populated mostly by white Americans. The NFL and NBA were struggling financially and were much less popular than college football and basketball. The Olympics were still open only to amateur athletes. But the sports landscape changed dramatically in the 1960s. Coverdale traces this development by covering the significant events and iconic players of the decade, including stars such as Sandy Koufax, Johnny Unitas, Bobby Orr, and Jack Nicklaus. There were great teams and incredible rivalries, and professional and college sports alike expanded and thrived. Featuring over 70 photos of legendary athletes and memorable moments, The 1960s in Sports transports the reader back to a golden age in sports. With additional coverage of important historical events such as the Cold War, Vietnam, and the Civil Rights Movement, this book also reveals how social and political events impacted the sports world, making it an invaluable resource for anyone interested in this significant decade.