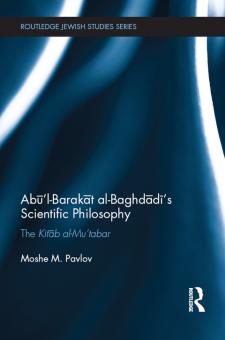 Abū’l-Barakāt is often considered one of the most comprehensive philosophers of the Arabic-Jewish milieu in the medieval age. His extensive and unique philosophical theories, especially his theories in the particular sciences, were seen as a major challenge for the traditional conceptions of the Aristotelian school of thought during and after this period. ‘Abū’l-Barakāt al-Baghdādī’s Scientific Philosophy’ explores the core material of Abū’l-Barakāt’s scientific studies, found in his magnum opus the Kitāb al-Mu‘tabar. The book then locates these scientific theories within Abū’l-Barakāt’s philosophy more widely. Whilst providing a comprehensive critique of ancient philosophy, including the work of Aristotle, certain affinities between Abū’l-Barakāt’s work and that of more modern scientific conceptions are also examined. Containing vast amounts of previously untranslated text, ‘Abū’l-Barakāt al-Baghdādī’s Scientific Philosophy’ sheds new light on the philosopher’s scientific theories, particularly with regards to his logical conceptions. For this reason, the book will be a valuable resource for students and scholars of Jewish and Islamic Philosophy, whilst the scientific material will appeal to those studying the history of science.