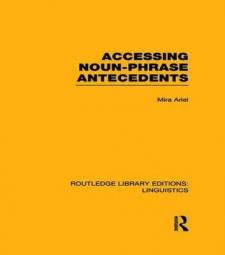 Accessing Noun-Phrase Antecedents offers a radical shift in the analysis of discourse anaphora, from a purely pragmatic account to a cognitive account, in terms of processing procedures. Mira Ariel defines referring expressions as markers signalling the degree of Accessibility in memory of the antecedent. The notion of Accessibility is explicitly defined, the crucial factors being the Salience of the antecedent, and the Unity between the antecedent and the anaphor.

This analysis yields an astonishing array of new results. The precise distribution of referring expressions in actual discourse is directly predicted. Several universals of anaphoric relations are stated. Thus, although not all languages necessarily have the same markers, and nor do they assign them precisely the same function, Ariel shows that they all obey the same Accessibility marking hierarchy.