Accounting for the Fall of Silver 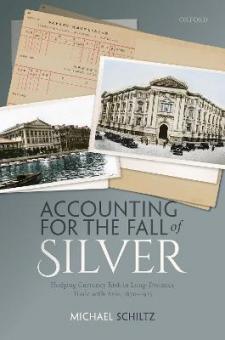 The second half of the nineteenth century is correctly known to have culminated in the emergence of the gold standard as the first truly international monetary regime. The processes leading up to this remarkable feat are, however, far less documented or understood. Economic historians have only recently started digging into the causes behind the 'fall of silver' that preceded the scramble for gold. It is nowadays clear that its effects were felt worldwide. Not in the
least, silver depreciation severely affected East-West trade. It was, among other factors, behind the bankruptcy of several powerful institutions as the Oriental Bank Corporation. Yet at the same time, it cemented the position of other banks, some of which exist until this very day (HSBC, Standard
Chartered). What did these banks know that others did not?

In Accounting for the Fall of Silver, Michael Schiltz explains that the 1870s and 1880s witnessed furious experiments with new financial products and, equally important, strategies for hedging exchange rate risk. Drawing on archives that have never been used before, the book throws new light on an important episode of nineteenth century world history. At the same time, it illuminates lesser known aspects of the first gold standard period. It draws attention to the existence of 'carry
trades' between European money markets and the lesser liquid Asian periphery; and describes the creation of financial contracts with the sole aim of enabling commodity finance among Asian mercantile centers.