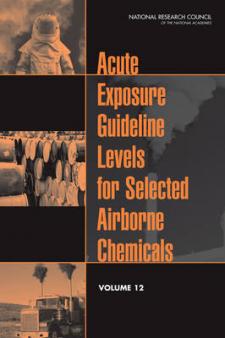 Extremely hazardous substances (EHSs) can be released accidentally as a result of chemical spills, industrial explosions, fires, or accidents involving railroad cars and trucks transporting EHSs. Workers and residents in communities surrounding industrial facilities where EHSs are manufactured, used, or stored and in communities along the nation's railways and highways are potentially at risk of being exposed to airborne EHSs during accidental releases or intentional releases by terrorists. Using the 1993 and 2001 NRC guidelines reports, the National Advisory Committee - consisting of members from the Environmental Protection Agency, the Department of Defense, the Department of Energy, the Department of Transportation, other federal and state governments, the chemical industry, academia, and other organizations form the private sector has developed Acute Exposure Guideline Levels (AEGL) for more than 270 EHSs. In 1998, the EPA and DOD requested that the NRC independently reviewed the AEGLs developed by the NAC.
In response to that request, the NRC organized within its Committee on Toxicology the Committee on Acute Exposure Guideline Levels, which prepared this report, Acute Exposure Guideline Levels for Selected Airborne Chemicals: Volume 12. This report explains the scientifically valid conclusions that are based on the data reviewed by NAC and consistent with the NRC guideline reports and provides comments and recommendations for how AEGL could be improved.