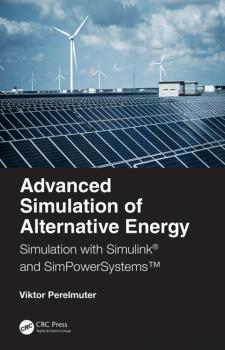 Advanced Simulation of Alternative Energy: Simulations with Simulink(R) and SimPowerSystems(TM) considers models of new and promising installations of renewable energy sources, as well as the new trends in this technical field. The book is focused on wind generators with multiphase generators, models of different offshore parks, wind shear and tower shadow effect, active damping, system inertia support, synchronverter modeling, photovoltaic cells with cascaded H-Bridge multilevel inverters, operation of fuel cells with electrolyzers and microturbines, utilization of ocean wave and ocean tide energy sources, pumped storage hydropower simulation, and simulation of some hybrid systems. Simulink(R) and its toolbox, SimPowerSystems(TM) (its new name Electrical/Specialized Power Systems), are the most popular means for simulation of these systems. More than 100 models of the renewable energy systems that are made with use of this program environment are appended to the book. The aims of these models are to aid students studying various electrical engineering fields including industrial electronics, electrical machines, electrical drives, and production and distribution of electrical energy; to facilitate the understanding of various renewable energy system functions; and to create a platform for the development of systems by readers in their fields. This book can be used by engineers and investigators as well as undergraduate and graduate students to develop new electrical systems and investigate the existing ones.