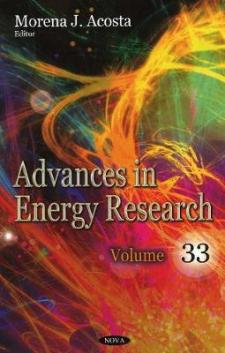 Volume 33 begins with a focus on gas hydrates, also known as methane hydrates, which are formed due to high hydraulic pressures present under the cold seabed over long periods of time. Following this, an exploratory method using semi-structured interviews was undertaken to investigate the barriers and drivers for implementing energy efficiency measures in South Africa's cement finishing mill. To address the large energy consumption of microalgae dewatering and to increase revenues from microalgae, a novel process for the prior sustainable extraction of carotenoids from wet microalgae biomass is proposed. The authors describe the evolution of smart grids in some developing countries, highlighting the challenges and trends for the next years. For this purpose, reference cases corresponding to different developing countries of Africa and America are used. Additionally, the basics of high efficiency cogeneration and the mathematical model used to calculate the amount of electricity in cogeneration are discussed. In one study, the impedance of the diffusion and reaction processes in an electrochemical cell is modelled by means of transmission line equivalent electric circuits. To discuss the applications of common techniques to control the efficiency and costs of underground ventilation, detailed information on current practices is collected through discussions with miners to identify relevant problems. The authors go on to explore barriers and enablers which impact the durability of solar street lighting systems in rural India to create a renewable energy eco-system in rural poor communities. Later, it is proposed that statistical control charts can assist in controlling energy consumption in universities, and the rate of energy consumption flow is used to diagnose high-energy consumption. The closing research is an analysis of problems found during the operation of the biogas power system at Baiturrahman boarding school, West Java, Indonesia, and recommendations to enhance the system performance are provided.