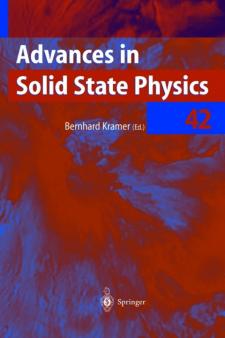 The 2002 Spring Meeting of the "Deutsche Physikalische Gesellschaft" was held in Regensburg from March 25th to 29th, 2002. The number of conference attendees has remained remarkably stable at about 2800, despite the decreas ing number of German PhD students. This can be taken as an indication that the program of the meeting was very attractive. The present volume of the "Advances in Solid State Physics" contains the written versions of most of the invited talks, also those presented as part of the Symposia. Most of these Symposia were organized by several divisions in collaboration and they covered fascinating selection of topics of current interest. I trust that the book reflects this year's status of the field in Germany. In particular, one notes a slight change in paradigms: from quantum dots and wires to spin transport and soft matter systems in the broadest sense. This seems to reflect the present general trend in physics. Nevertheless, a large portion of the invited papers as well as the discussions at the meeting concentrated on nanostrnctured matter.