Advances in the Theory of Automorphic Forms and Their $L$-functions 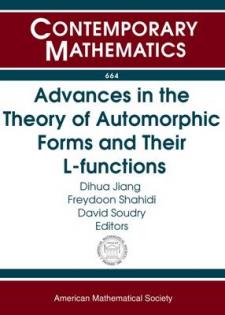 This volume contains the proceedings of the workshop on ``Advances in the Theory of Automorphic Forms and Their $L$-functions'' held in honor of James Cogdell's 60th birthday, held from October 16-25, 2013, at the Erwin Schrodinger Institute (ESI) at the University of Vienna.

The workshop and the papers contributed to this volume circle around such topics as the theory of automorphic forms and their $L$-functions, geometry and number theory, covering some of the recent approaches and advances to these subjects. Specifically, the papers cover aspects of representation theory of $p$-adic groups, classification of automorphic representations through their Fourier coefficients and their liftings, $L$-functions for classical groups, special values of $L$-functions, Howe duality, subconvexity for $L$-functions, Kloosterman integrals, arithmetic geometry and cohomology of arithmetic groups, and other important problems on $L$-functions, nodal sets and geometry.