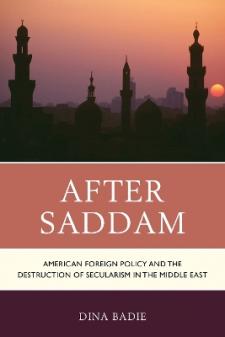 After Saddam: American Foreign Policy and the Destruction of Secularism in the Middle East investigates the manner in which American foreign policy in Iraq artificially shifted the balance of power in the region and brought religious identities to the foreground. Deposing Saddam Hussein resulted in a new regional order that diminished the strength of secular nationalism, elevated Iran and Saudi Arabia as regional rivals, and by implication, established a new ideological paradigm that privileged competing religious factions over secular ideals. The trend first manifested itself in Iraq during the American occupation with Iranian-backed Shiites fighting Saudi-supported Sunnis. A similar dynamic is evident in current regional wars in Syria and Yemen. By elevating particular groups through rhetorical, financial, and military support, civil conflicts in the Middle East reflect the ideologies behind the Saudi-Iranian rivalry. This book therefore looks beyond popular narratives of intractable, long-standing Sunni-Shia conflict to explain the source of current sectarian tension as a product of balance of power dynamics. It also helps to explain the fracturing of the region that created a ripe environment for groups like the Islamic State to capitalize on sectarian grievances.

This book relies and builds on balance of power theorizing by looking at the way that traditional competition for power between states and nonstate actors shapes ideological competition. For example, during the Cold War, the two major world powers-the U.S. and the Soviet Union-helped to shape international conflicts so that the narrative of "capitalism vs. communism" played a prominent role in civil and international conflicts-such as in Korea, Nicaragua, or Angola. By meddling in the internal affairs of states, arming rebel groups, and lending support to competing factions, the U.S. and U.S.S.R. shaped not only outcomes, but also the ideas underpinning conflicts. Today, a similar dynamic can be discerned in the Middle East.