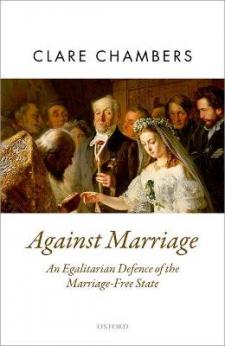 Against Marriage is a radical argument for the abolition of state-recognised marriage. Clare Chambers argues that state-recognised marriage violates both equality and liberty, even when expanded to include same-sex couples. Instead Chambers proposes the marriage-free state: an egalitarian state in which religious or secular marriages are permitted but have no legal status.

Part I makes the case against marriage. Chambers investigates the critique of marriage that has developed within feminist and liberal theory. Feminists have long argued that marriage is a violation of equality since it is both sexist and heterosexist. Chambers endorses the feminist view and argues, in contrast to recent egalitarian pro-marriage movements, that same-sex marriage is not enough to make marriage equal. Chambers argues that state-recognised marriage is also problematic for
liberalism, particularly political liberalism, since it imposes a controversial, hierarchical conception of the family that excludes many adults and children.