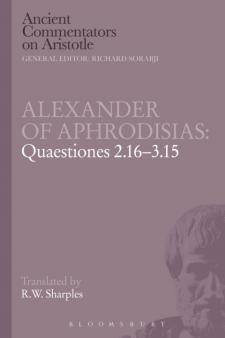 This volume completes the translation in this series of Quaestiones attributed to Alexander of Aphrodisias, the leading ancient commentator on Aristotle. The Quaestiones are concerned with physics and metaphysics, psychology and divine providence. They exemplify the process whereby Aristotle's thought came to be organised into 'Aristotelianism' and show how interpretations were influenced by doctrines of Hellenistic philosophy. Some, translated into Arabic and thence into Latin, played a part in the transmission of ancient Greek philosophy to the medieval world. Those interested in Aristotle's psychological views will find this half of Quaestiones particularly valuable. Ten of the problems discussed explicitly involve issues raised in On the Soul, including the unity of apperception and the transition from first to second actuality in the act of contemplation. A further dozen concern problems in physical theory, including infinity, necessity and potentiality. Quaestio 2.21 concerns divine providence and helps supplement our knowledge of Alexander's position based on surviving Arabic fragments of his On Providence.