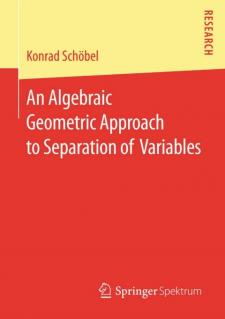 An Algebraic Geometric Approach to Separation of Variables

Konrad Schöbel aims to lay the foundations for a consequent algebraic geometric treatment of variable Separation, which is one of the oldest and most powerful methods to construct exact solutions for the fundamental equations in classical and quantum physics. The present work reveals a surprising algebraic geometric structure behind the famous list of separation coordinates, bringing together a great range of mathematics and mathematical physics, from the late 19th century theory of separation of variables to modern moduli space theory, Stasheff polytopes and operads. "I am particularly impressed by his mastery of a variety of techniques and his ability to show clearly how they interact to produce his results.”   (Jim Stasheff)