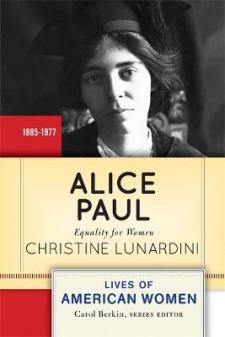 Alice Paul: Equality for Women shows the dominant and unwavering role Paul played in the passage of the Nineteenth Amendment, granting the vote to American women. The dramatic details of Paul's imprisonment and solitary confinement, hunger strike, and force-feeding at the hands of the U.S. government illustrate her fierce devotion to the cause she spent her life promoting. Placed in the context of the first half of the twentieth century, Paul's story also touches on issues of progressivism and labor reform, race and class, World War I patriotism and America's emerging role as a global power, women's activism in the political sphere, and the global struggle for women's rights.

About the Lives of American Women series: Selected and edited by renowned women's historian Carol Berkin, these brief biographies are designed for use in undergraduate courses. Rather than a comprehensive approach, each biography focuses instead on a particular aspect of a women's life that is emblematic of her time, or which made her a pivotal figure in the era. The emphasis is on a "good read," featuring accessible writing and compelling narratives, without sacrificing sound scholarship and academic integrity. Primary sources at the end of each biography reveal the subject's perspective in her own words. Study questions and an annotated bibliography support the student reader.