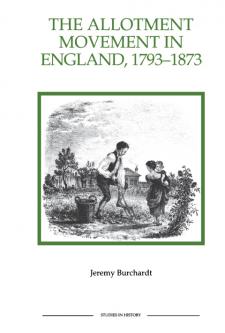 The living standards of the rural poor suffered a severe decline in the first half of the nineteenth century as a result of high population growth, changing agricultural practices, enclosure and the decline of rural industries. Allotment provision was the most important counterweight to the pressures. This book offers the first systematic analysis of the early nineteenth-century allotment movement, providing new data on the chronology of the movement and on the number, geographical distribution, size, rents, cultivation yields and effect on living standards of allotments, showing how the movement brought the culture of the rural labouring poor more closely into line with the mainstream values of respectable mid-Victorian England. This book casts new light on central aspects of early and mid-nineteenth-century social and economic history, agriculture and rural society.

JEREMY BURCHARDT is lecturer in Rural History, University of Reading.