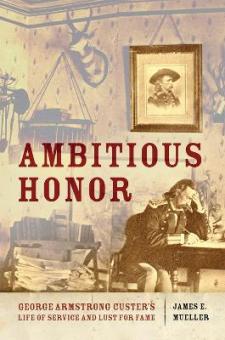 George Armstrong Custer, one of the most familiar figures of nineteenth-century American history, is known almost exclusively as a soldier, his brilliant military career culminating in catastrophe at Little Bighorn. But Custer, author James E. Mueller suggests, had the soul of an artist, not of a soldier. Ambitious Honor hones this radically new perspective, arguing that an artistic passion for creativity and recognition drove Custer to success and, ultimately, to the failure that has overshadowed his notable achievements.

Custer's ambition is well known and played itself out on the battlefield and in his persistent quest for recognition. What Ambitious Honor provides is the context for understanding how Custer's theatrical personality took shape and thrived, beginning with his training at a teaching college before he entered West Point. Teaching, Mueller notes, requires creativity and performance, both of which fascinated and served Custer throughout his life - in his military leadership, his politics, and even his attention-getting, self-designed uniforms. But Custer's artistic personality emerges most clearly in his writing career, where he displayed a talent for what we now call literary journalism. Ambitious Honor offers a close look at Custer's work as a best-selling author right up to the time of his death, when he was writing another book and planning a speaking tour after the 1876 campaign against the Sioux and Cheyenne.

Custer's fate at Little Bighorn was so dramatic that it sealed his place in the national story and obscured, Mueller contends, the more interesting facets of his true nature. Ambitious Honor shows us Custer anew, as an artist thrust into the military because of the times in which he lived. This nuanced portrait, for the first time delineating his sense of image, whether as creator or consumer, forever alters Custer's own image in our view.