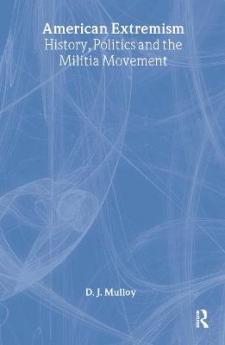 American Extremism explains how at the heart of the politics practiced by the militia movement is an attempt to define the nature of 'Americanism', and shows how militia members employ the myths, metaphors and perceived historical lessons of the American Revolution, the constitutional settlement and America's frontier experience to do so. Mulloy argues that militia members' search for the 'authority of history' leads them to a position best characterized as 'ahistorical historicism', in which political interests in the present are given greater weight than the demands of a historically accurate reading of the past.

With discussion of such recent events as the Oklahoma City bombing, Waco and the September 11th attacks alongside topical issues including militia conspiracy theories and the origins of Americans' right to keep and bear arms, this work provides the deepest understanding to date of the American militia movement.