The Americans in the Great War - Vol II 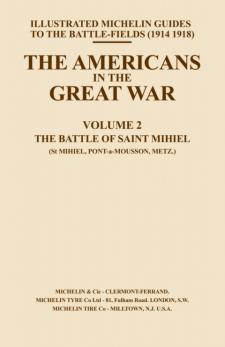 Volume II of III
This volume is sub-titled The Battle of St Mihiel, and covers St Mihiel, Pont a Mouson and Metz. The first 18 pages provide the historical background, how the St Mihiel salient was formed in September 1914 and how it was eventually eliminated four years later, in September 1918. Details of the American forces (corps and divisions) involved are given with photos of some of their commanders. Then follow the outlines of three guided tours round the battlefields with comments on the scenes of interest and accounts of the fighting. The first tour covers Verdun to Commercy, via Calonne trench, Eparges, Apremont Forest, Ailly Wood and St Mihiel, including a visit to the latter. The next trip goes from Commercy to Metz, via Pont a Mousson and including a visit to Pretre Wood where there was heavy fighting from Sep 1914 to May 1915 when it finally passed into French hands and remained there. It ends with a tour of Metz. The third tour runs from Metz to Verdun via Etain, the main place of interest visited on this leg which does not take in the Verdun battlefield. Good maps and battlefield photos all make this an interesting piece of WWI history.