For and Against Abelard 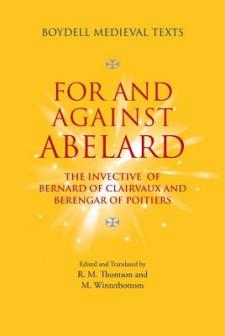 The late eleventh and twelfth centuries were Europe's first age of pamphlet warfare, of invective and satire. The perceived failure, or at least hypocrisy, of its new institutions-the new monastic orders and the reformed papacy-gave rise to the phenomenon, and it was shaped by the study of grammar and rhetoric in the new Schools. The central figures in the texts in the present book are Bernard of Clairvaux, the powerful ostensible founder of the Cistercianorder, and the popular and influential teacher Peter Abelard, leader of the radical faction in the Schools of Paris. The event which sparked this controversy was the Church council at Sens in 1141 which had led to the condemnation of Abelard's doctrines. Abelard proposed to use reason to explain the mysteries of faith, and this had led him into all kinds of difficulties with established church doctrine. The leading light in the atttack on his ideas was Bernard, the famous abbot of Clairvaux, a group of whose letters, written to gather support for it before and after the Council, are presented here. A little while later Abelard was defended by the vituperative but otherwise unknown Berengar, who wrote an outrageous Apology attacking Bernard; we also edit his remaining polemical works: his Letter to the Carthusians, and his Letter to the Bishop of Mende. None of Berengar's works has been translated before.An extensive introductory essay describes the course of the debate and the personnel, and analyses the invective employed by both Bernard and Berengar. There is full annotation identifying the writers' sources and clarifying the issues.