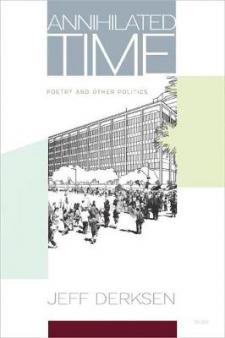 Reading against the grain of global ideological flows, Derksen demonstrates how borders, identities, national literatures, urban territories, built space and the spaces of culture and politics have not simply been eroded by globalization, but how the traditional identity-determined scales of culture are being re-imagined as contested spaces for dynamic communities of discourse. Apologists for the current global American imperialism ironically characterize it as a civilizing force generously brought to the world by a presumed American exceptionalism to empire. In their view, it is an extension of a neoliberal economic developmentalism, imagined as non-ideological and anti-authoritarian ("democratic") and as the highest cultural form of capitalism. Poetry, that under-achieving commodity, that "greeny flower," has not been exempt from the increased glare of what is now the new state cultural watchdog. An early public controversy--generating vitriolic discourse--was the long poem "Somebody Blew Up America," by Amiri Baraka, then poet laureate for the state of New Jersey. Jeff Derksen spins this controversial issue (and many others) around the pivot of September 11, 2001.
To read these works in the cultural and social context that led to them being criminalized or erased, we can look to how 9/11 provided an historical occasion for a reconfiguration of the role of culture in the nation state. In this collection of essays, Derksen explores the ways in which seemingly minor forms of culture--poetry, visual art, and critical practices--encounter what he calls "the long present neoliberal moment" of the imperialist agenda of globalization. The title inverts Marx's famous view (central to critical geography) that "the problem of space" has been overcome: that capitalism annihilates space with time. Today, literary, cultural and geographical readings emphasize our lived experience of space and contest the representations of a globalized environment that capital and its ideological software, neoliberalism, promote.