The Annual of Psychoanalysis, V. 24 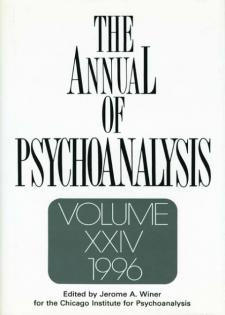 Volume 24 of The Annual opens with a memorial tribute to the late Merton M. Gill (1914-1994), a major voice in American psychoanalysis for half a century.  Remembrances of Gill by Robert Holt, Robert Wallerstein, Philip Holzman, and Irwin Hoffman are followed by thoughtful appreciations of Gill's final book, Psychoanalysis in Transition: A Personal View (Analytic Press, 1994), by John Gedo, Jerome Oremland, Arnold Richards and Arthur Lynch, Joseph Schachter, and Bhaskar Sripada and Shara Kronmal. Section II offers four papers from a major conference on "Mind/Brain" held in Osaka, Japan.  In addition to publishing two clinical papers by the Chicago analyst John Gedo, The Annual introduces readers to two prominent Japanese neuroscientists whose work is relevant to psychoanalysis.  Hiroshi Utena links brain development to the individual's freedom to make optimal adaptive choices, whereas Makoto Iwata outlines the modular organization of vision in the brain and then illustrates each modular potential by examining the paintings of four artists: Mondrian, Duchamp, Seurat, and Rothko. Kenneth Newman's sensitive consideration of analyst self-discourse as the outcome of successful management of the countertransference and Frank Summers' astute assessment of the place of self psychology in the history of psychoanalytic ideas are followed by three engaging and instructive studies in applied analysis: Elaine Caruth and Milton Eber's examination of Woody Allen's The Purple Rose of Cairo as a metaphoric depiction of the blurring of boundaries in psychotherapy; Frank and Annette Lachmann's study of the creative process of Henrik Ibsen as a self-transformational response to narcissistic injury; and W. W. Meissner's exploration of the role of shame in Vincent van Gogh's life and art.  The volume concludes with a provocative contribution to psychoanalytic history: J. Bos's social-constructivist rereading of the Minutes of the Vienna Psycho-Analytic Society with an eye to illuminating why and how psychoanalysis changed during its early years. True to its distinguished lineage, volume 24 of The Annual continues to broaden the conceptual, clinical, and historical vistas of its readers.  Moreover, with its revealing reminiscences and substantive appraisals of Merton Gill, this volume becomes a fascinating marker in the very psychoanalytic history it helps recount.