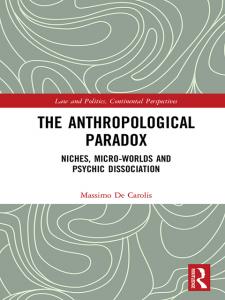 This book addresses how the erosion of traditional forms of political association and legal regulation has given rise to a pluralism of "imperfect communities" constantly exposed to the risk of dissolution. These are niches and micro-worlds that are connected through precarious and ambivalent ties. Such a far-reaching transformation affects at one and the same time both our psychic and social identity. The book argues that this phenomenon is linked to the proliferation of new forms of psychic "disorder" – depression, personality disorder, dissociation – typical of hypermodern societies. However, while these can easily turn into genuine disorders, they can also open onto richer forms of identity, more complex than those of the past. Based on this analysis, the book’s main claim is that this dynamic epitomizes a general anthropological paradox – one that has always marked the human animal: humans are bound by their own biological constitution to fend off disorder by drawing the boundaries of artificial niches, and yet they are inclined to expose themselves to unlimited contingency so that they can find a truly suitable environment. Pursuing a novel understanding of the apparent collapse of traditional juridico-political settings, this book makes the case that the emergence of dissociations at several levels – individual, social, political, legal – does not stem from a lack of political imagination. Rather, it is a situation with which humans are inevitably confronted: a perennial tension between the limited and the unlimited, between the desire to take refuge and the desire to cross borders.