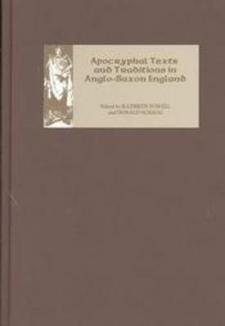 Apocrypha and apocryphal traditions in Anglo-Saxon England have been often referred to but little studied. This collection fills a gap in the study of pre-Conquest England by considering what were the boundaries between apocryphaland orthodox in the period and what uses the Anglo-Saxons made of apocryphal materials. The contributors include some of the most well-known and respected scholars in the field. The introduction - written by Frederick M. Biggs, one of the principal editors of Sources of Anglo-Saxon Literary Culture - expertly situates the essays within the field of apocrypha studies. The essays themselves cover a broad range of topics: both vernacular and Latin texts, those available in Anglo-Saxon England and those actually written there, and the uses of apocrypha in art as well as literature. Additionally, the book includes a number of completely new editions of apocryphal texts which were previously unpublished or difficult to access. By presenting these new texts along with the accompanying range of essays, the collection aims to retrieve these apocryphal traditions from the margins of scholarship and restore tothem some of the importance they held for the Anglo-Saxons.