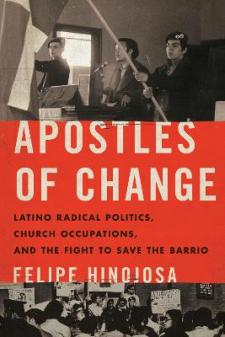 In the late 1960s, the American city found itself in steep decline. An urban crisis fueled by federal policy wreaked destruction and displacement on poor and working-class families. The urban drama included religious institutions, themselves undergoing fundamental change, that debated whether to stay in the city or move to the suburbs. Against the backdrop of the Black and Brown Power movements, which challenged economic inequality and white supremacy, young Latino radicals began occupying churches and disrupting services to compel church communities to join their protests against urban renewal, poverty, police brutality, and racism.

Apostles of Change tells the story of these occupations and establishes their context within the urban crisis; relates the tensions they created; and articulates the activists' bold, new vision for the church and the world. Through case studies from Chicago, Los Angeles, New York City, and Houston, Felipe Hinojosa reveals how Latino freedom movements frequently crossed boundaries between faith and politics and argues that understanding the history of these radical politics is essential to understanding the dynamic changes in Latino religious groups from the late 1960s to the early 1980s.