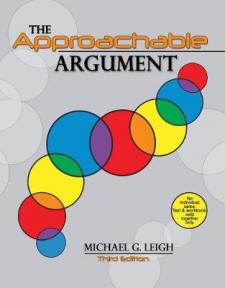 This text is written in a simple, conversational format, but is extremely comprehensive, covering a broad number of subjects.

The Approachable Argument also contains numerous current real-world examples, making it easy for students to relate and learn by example rather than by theory.

This book supports the belief that an argument made orally creates another level of learning beyond writing text. The Approachable Argument addresses the topic of pre-critical thinking; the attitudes and prejudices that obscure clear thinking, and demonstrates both the right way and the wrong way to reason simultaneously.