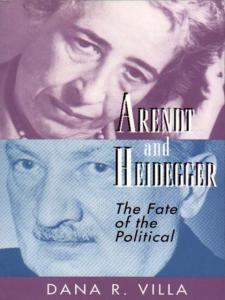 Theodor Adorno once wrote an essay to &quote;defend Bach against his devotees.&quote; In this book Dana Villa does the same for Hannah Arendt, whose sweeping reconceptualization of the nature and value of political action, he argues, has been covered over and domesticated by admirers (including critical theorists, communitarians, and participatory democrats) who had hoped to enlist her in their less radical philosophical or political projects. Against the prevailing &quote;Aristotelian&quote; interpretation of her work, Villa explores Arendt's modernity, and indeed her postmodernity, through the Heideggerian and Nietzschean theme of a break with tradition at the closure of metaphysics. Villa's book, however, is much more than a mere correction of misinterpretations of a major thinker's work. Rather, he makes a persuasive case for Arendt as the postmodern or postmetaphysical political theorist, the first political theorist to think through the nature of political action after Nietzsche's exposition of the death of God (i.e., the collapse of objective correlates to our ideals, ends, and purposes). After giving an account of Arendt's theory of action and Heidegger's influence on it, Villa shows how Arendt did justice to the Heideggerian and Nietzschean criticism of the metaphysical tradition while avoiding the political conclusions they drew from their critiques. The result is a wide-ranging discussion not only of Arendt and Heidegger, but of Aristotle, Kant, Nietzsche, Habermas, and the entire question of politics after metaphysics.