The Artisans of Banaras 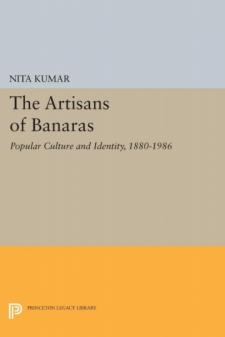 Nita Kumar offers an evocative and sensitive portrayal of rarely explored aspects of Hindu culture through her analysis of the way leisure time is used by Hindu and Muslim artisans of Banaras--the weavers, metalworkers, and woodworkers. Music, festivals, the place of physical culture, and the importance of going &quote;to the outer side&quote; all are examined as Kumar looks at changes that have occurred in leisure-time activities over the last century. The discussion raises questions of the cultural and conceptual aspects of working-class life, the role of fun and play in Indian thought, the importance of public activities in terms of personal identity, and the meaning of an Indian city to its residents. This analysis turns away from the usual models of Hindu-Muslim conflict by seeing divisions based on occupation, income level, education, and urban neighborhood as more relevant for the construction of identity than those based on religion or community. Kumar draws her information from police station records, Hindi newspapers and periodicals, publications of local individuals and organizations, oral history, and ethnographic data.Originally published in 1988.The Princeton Legacy Library uses the latest print-on-demand technology to again make available previously out-of-print books from the distinguished backlist of Princeton University Press. These editions preserve the original texts of these important books while presenting them in durable paperback and hardcover editions. The goal of the Princeton Legacy Library is to vastly increase access to the rich scholarly heritage found in the thousands of books published by Princeton University Press since its founding in 1905.