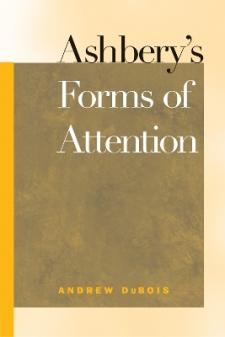 Andrew DuBois assesses John Ashbery's career as a poet in the context of changes in 20th-century aesthetics, the rise of the information age, and the proliferation of aural and visual stimuli. The issue of attention, he argues, is useful not only for understanding the problems of perception and concentration in an age of information overload but also for understanding how Ashbery's poetry and poetry in general contend with those issues. Ashbery's art, DuBois demonstrates, embodies the conflicts between traditional and postmodern forms of communication. The lack of traditional narrative frameworks or forms in Ashbery's poems creates problems of attention. This strategy places a heavy burden on the reader, since Ashbery's content - a melange of cultural references and sympathies - defies set forms. Yet Ashbery's concern with traditional poetic conventions is still clear in his work, and it is the tension between past and present modes of poetic discourse that best describes Ashbery's work as a poet. Among other subjects DuBois addresses Ashbery's many roles - as theorist, postmodern metaphysical, and enemy of poetic decorum; his experiments in ekphrasis (poems that take other art works as their subjects); his prose; his mastery of the long form as a vehicle for extended meditation; and his use of stream-of-consciousness as a poetic strategy. In highlighting the major aesthetic and cultural impulses underlying Ashbery's work, DuBois illuminates not only the lasting relevance of his poetry but also the larger issues of attention and perception in reading, thinking, and being in the postmodern era.