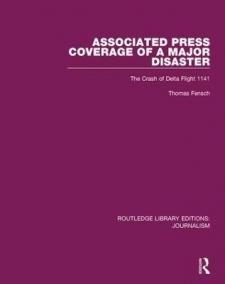 Originally published in 1989. This diary of a news event looks at how the reporting happened as spread by the news wire system of the Associated Press service in America. Analysing the flow of information in this detailed way, this book presents how a major disaster, a fast-moving story with considerable spin, was fed out to the press via the Dallas bureau in 1988. Introductory chapters outline the workings of a press bureau office during a major story and present interview sections with key reporters on the story about how their role unfolded. Sidebar commentary alongside the reproductions of the news wires, organised by date and time, adds interesting discussion throughout the book, while a conclusion evaluates the coverage of the story. The Appendices include reproductions of Texas newspapers' resulting pages about the crash. This is a fascinating case-study of the dissemination of news date before the internet, compiled at a time when computers were just large enough to retain in memory all stories relating to event 'X' in order for this kind of analysis to be attempted.