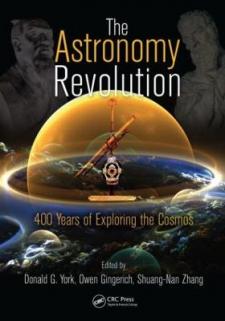 Some 400 years after the first known patent application for a telescope by Hans Lipperhey, The Astronomy Revolution: 400 Years of Exploring the Cosmos surveys the effects of this instrument and explores the questions that have arisen out of scientific research in astronomy and cosmology. Inspired by the international New Vision 400 conference held in Beijing in October 2008, this interdisciplinary volume brings together expanded and updated contributions from 26 esteemed conference speakers and invited others. Looking beyond questions of science to the role of moral responsibility in human civilizations, the book offers the unique vantage points of contributions from both Eastern and Western cultures.

Extensively illustrated in full color, this book consists of six parts. Aimed at young scientists, the first part presents perspectives on creativity and technology in scientific discovery. In the second part, contributors examine how the telescope has impacted our knowledge of the Universe-from the formation of galaxies to the death of stars. The third part of the book outlines some of the challenges we face in understanding dark matter, dark energy, black holes, and cosmic rays, and the fourth part discusses new technologies that will be useful in attacking new and unresolved questions. The fifth part of the book examines the intellectual impact that the telescope has had on society in China and in the West.

The book concludes with an investigation of "big questions": What is the origin of the laws of physics as we know them? Are these laws the same everywhere? How do these scientific laws relate to the moral laws of society? Does what we know depend on cultural ways of asking the questions? Is there life elsewhere? And what about the questions that science cannot answer? Celebrating the historical significance of the telescope, this unique book seeks to inspire all those involved or interested i