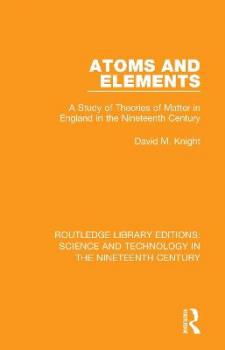 First published in 1967. The impression is sometimes given that the Atomic Theory was revived in the early years of the nineteenth century by John Dalton, and that continuously from then on it has played a vital role in chemistry. The aim of this study is to revise this over-simplified picture. Atomic explanations seemed to chemists to go beyond the facts, to fail to lend themselves to mathematical expression, and to deny the ultimate simplicity and unity of all matter. Most, therefore, rejected them.

Meanwhile, physicists were developing a whole range of atomic theories to explain the physical properties of bodies in terms of very simple atoms or particles.

During the last thirty years of the century the position changed, as physicists and chemists came to agree on a common atomic theory. But the last prominent opponents of atomism were not converted until the early years of the twentieth century, by which time studies of radioactivity had made it clear that the billiard-ball Daltonian atom must, in any case, be abandoned.