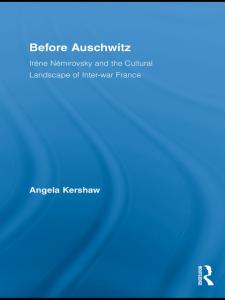 This book analyses Irene Némirovsky’s literary production in its relationship to the literary and cultural context of the inter-war period in France. It examines topics of central importance to our understanding of the literary field in France in the period, such as: the close relationship between politics and literature; the historical, political, cultural and personal legacies of the First World War; the so-called ‘crisis of the novel’ and the attempt to create and develop new narrative forms; the phenomenon of Russian emigration to Paris in the wake of the Russian Revolution and Civil War; the possibilities for the creation of a French-Jewish identity and mode of writing; and the threat of fascism and the approach of the Second World War.