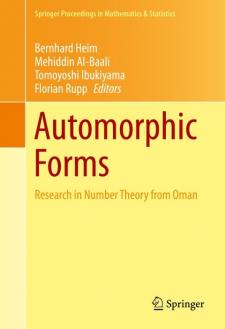 This edited volume presents a collection of carefully refereed articles covering the latest advances in Automorphic Forms and Number Theory, that were primarily developed from presentations given at the 2012 “International Conference on Automorphic Forms and Number Theory,” held in Muscat, Sultanate of Oman. The present volume includes original research as well as some surveys and outlines of research altogether providing a contemporary snapshot on the latest activities in the field and covering the topics of: Borcherds products Congruences and Codes Jacobi forms Siegel and Hermitian modular forms Special values of L-series Recently, the Sultanate of Oman became a member of the International Mathematical Society. In view of this development, the conference provided the platform for scientific exchange and collaboration between scientists of different countries from all over the world. In particular, an opportunity was established for a close exchange between scientists and students of Germany, Oman, and Japan. The conference was hosted by the Sultan Qaboos University and the German University of Technology in Oman.