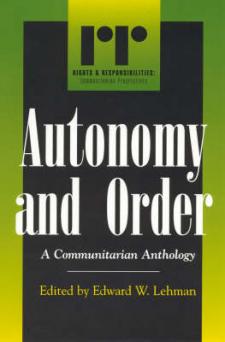 The Communitarian Movement asserts that America and other Western societies overemphasize individual rights and underemphasize collective responsibilities. In the debate between the importance of individual and community rights The New Golden Rule by Amitai Etzioni, one of the movement's founders, has emerged at the theoretical cutting edge of Commitarianism's challenge. This anthology of original essays by prominent political scientists, philosophers, and sociologists systematically advances our understanding of the movement's agenda. Using The New Golden Rule as the guidepost for organizing "conversations," the essays are structured around key questions that spring from Communitarian tenets. Although Amitai Etzioni's book provides the collection's framework, contributors have criticized, modified, or augmented his positions as they saw fit.