Ayurveda in The New Millennium 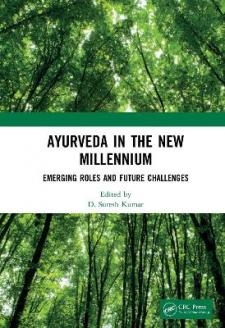 Ayurveda or "the sacred knowledge of longevity" has been practiced in India and many Asian countries since time immemorial. Interest in Ayurveda started growing all over the world in the late 1970s, following the Alma Ata Declaration adopted by the W.H.O. in 1978. Ayurveda in the New Millennium: Emerging Roles and Future Challenges attempts to survey the progress made in this field and to formulate a course of action to take Ayurveda through the new millennium. It also identifies the many stumbling blocks that need to be removed if Ayurveda is to cater to the needs of a wider audience.

Newer insights into the history of Ayurveda

Regulatory aspects of the manufacture of ayurvedic medicines

Nutraceuticals and cosmeceuticals from Ayurveda

Critical view of Ayurveda in the West

Direction for the Ayurveda renaissance

Ayurveda in the New Millennium: Emerging Roles and Future Challenges describes the strength of Ayurveda and how to usher in the Ayurveda renaissance. This book will be of interest to proponents of Ayurveda and all branches of traditional and alternative medicine. Experts from the fields of medicine, pharmacology, new drug discovery and food technology will also find it useful.