The Baboon in Biomedical Research 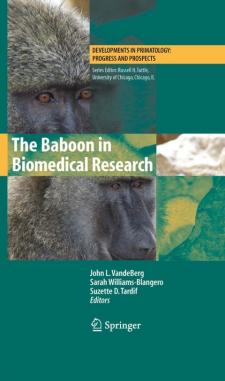 Nonhuman primates have played critical roles in biomedical research, and they are among the few animals whose use in research continues to increase. The scienti?c value of nonhuman primates derives from their close phylogenetic proximity to man and their consequent anatomic, physiologic, and genetic similarities to man. Only nonhuman primates can provide adequate models for many complex physiological and disease processes of humans. The baboon is a relative newcomer to the repertoire of nonhuman primates used in biomedical research. However, in less than 50 years since its ?rst use in the U. S. , it has become one of the most popular laboratory primate species. It is larger than the other widely used monkey species, making it advantageous for many types of experiments and technological developments. It is extraordinarily hardy and highly fecund in captivity. It closely resembles humans in a variety of physiological and disease processes, such as cholesterol metabolism, early stages of atherosclerosis, and alcoholic liver disease. Its chromosomes closely resemble those of humans, and many genes of the two species lie in the same chromosomal order. Among all primates, baboons are the most widely used models for the genetics of susceptibility to complex diseases and they are the ?rst nonhuman primate for which a framework genetic linkage map was established. In addition, the baboon genome is currently being sequenced, and as a result the utility of this species for biomedical research will be dramatically increased.