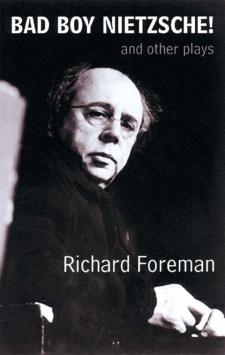 Bad Boy Nietzsche! and Other Plays

Richard Foreman has been at the leading edge of the theatrical avant-garde in the United States and throughout the world since 1968. His legendary productions, written and directed by him at his Ontological-Hysteric Theatre have influenced two generations of theater artists. This new anthology collects plays written and performed over six years, including Now That Communism Is Dead My Life Feels Empty, Maria del Bosco, Panic (How to Be Happy!), Bad Boy Nietzsche!, Bad Behavior and King Cowboy Rufus Rules the Universe.

Richard Foreman founded the Ontological-Hysteric Theatre in 1968. The theater is currently in the historic St. Marks Church, where he rehearses and produces one of his new plays each year, each play performing for 16 weeks every winter.