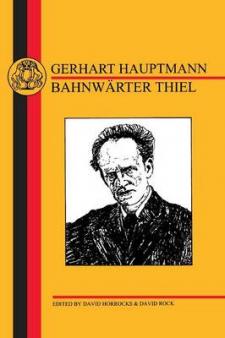 "Bahnw rter Thiel" (1988), by far the best story ever written by Gerhart Hauptmann, follows the principles of the Naturalist movement in its detailed study of the life and milieu of a humble and apparently unexceptional Prussian railwayman. Yet in its exploitation of symbolism, of techniques sometimes close to Impressionism, and in its subtle use of a changing narrative perspective, this Novelle goes beyond the essentially 'scientific' Naturalist approach: Hauptmann thus succeeds in exploring the complex interaction of suppressed social, psychological, physiological, and religious impulses far better than in any other work of this era.

This new edition has been prepared with
the changing needs of the today's learners and students of German in
mind. The late S.D. Stirk's scholarly edition of 1952, which also
included "Fasching," has seen sterling service, and we are
greatly indebted to it. However, by concentrating on just one story, we
have been able to offer more linguistic help in the notes and
vocabulary, as well as devoting considerably more space in the
introduction to detailed comments on characterisation and technique.
References to other works and to other periods of Hauptmann's long
career as a writer have been kept to a minimum.