The Balkans and the West 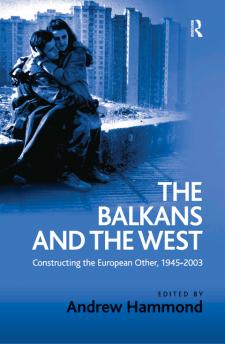 This collection of essays locates, investigates and challenges the manner in which the Balkans and the West have constructed each other since 1945. Scholars from the two sections of the continent explore a wide range of fiction, film, journalism, travel writing and diplomatic records both to analyse Western European balkanism and to study Balkan representations of the West over the last fifty years. The first section looks back to the Cold War, examining the divergent, often favourable images of the Balkans that existed in Western culture, as well as the variety of responses that appeared in South-East European writings on the West. The second section analyses the transitions that took place in representation during the 1990s. Here, contributors explore both the harsh denigration of the Balkans which came to dominate western discourse after the initial euphoria of 1989, and the emerging tradition of contesting Western balkanism in South-East European cultural production. Through this dual emphasis, the volume exposes the representational practices that help to maintain a deeply divided Europe, and challenges the economic and political injustices that result. Despite the rise to prominence of postcolonial theory, with its awareness of global inequality, the current crises in many parts of South-East Europe have received scant attention in literary and cultural studies. The Balkans and the West addresses this deficiency. Ranging in focus from Serbian cinema to Romanian travel literature, from Western economic writings to Yugoslav fiction, and from public discourse in Albania to NATO's vast propaganda machine, the essays offer wide insight into representation and power in the contemporary European context.