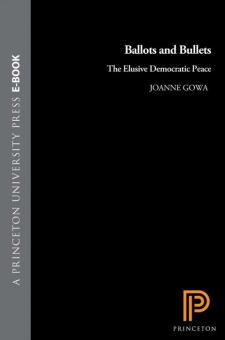 There is a widespread belief, among both political scientists and government policymakers, that "democracies don't fight each other." Here Joanne Gowa challenges that belief. In a thorough, systematic critique, she shows that, while democracies were less likely than other states to engage each other in armed conflicts between 1945 and 1980, they were just as likely to do so as were other states before 1914. Thus, no reason exists to believe that a democratic peace will survive the end of the Cold War. Since U.S. foreign policy is currently directed toward promoting democracy abroad, Gowa's findings are especially timely and worrisome. Those who assert that a democratic peace exists typically examine the 1815-1980 period as a whole. In doing so, they conflate two very different historical periods: the pre-World War I and post-World War II years. Examining these periods separately, Gowa shows that a democratic peace prevailed only during the later period. Given the collapse of the Cold War world, her research calls into question both the conclusions of previous researchers and the wisdom of present U.S. foreign policy initiatives. By re-examining the arguments and data that have been used to support beliefs about a democratic peace, Joanne Gowa has produced a thought-provoking book that is sure to be controversial.