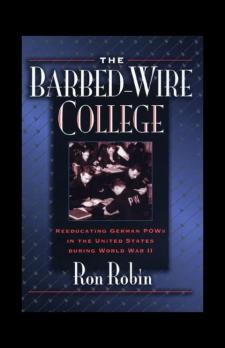 From Stalag 17 to The Manchurian Candidate, the American media have long been fascinated with stories of American prisoners of war. But few Americans are aware that enemy prisoners of war were incarcerated on our own soil during World War II. In The Barbed-Wire College Ron Robin tells the extraordinary story of the 380,000 German prisoners who filled camps from Rhode Island to Wisconsin, Missouri to New Jersey. Using personal narratives, camp newspapers, and military records, Robin re-creates in arresting detail the attempts of prison officials to mold the daily lives and minds of their prisoners.From 1943 onward, and in spite of the Geneva Convention, prisoners were subjected to an ambitious reeducation program designed to turn them into American-style democrats. Under the direction of the Pentagon, liberal arts professors entered over 500 camps nationwide. Deaf to the advice of their professional rivals, the behavioral scientists, these instructors pushed through a program of arts and humanities that stressed only the positive aspects of American society. Aided by German POW collaborators, American educators censored popular books and films in order to promote democratic humanism and downplay class and race issues, materialism, and wartime heroics. Red-baiting Pentagon officials added their contribution to the program, as well; by the war's end, the curriculum was more concerned with combating the appeals of communism than with eradicating the evils of National Socialism.The reeducation officials neglected to account for one factor: an entrenched German military subculture in the camps, complete with a rigid chain of command and a propensity for murdering &quote;traitors.&quote; The result of their neglect was utter failure for the reeducation program. By telling the story of the program's rocky existence, however, Ron Robin shows how this intriguing chapter of military history was tied to two crucial episodes of twentieth- century American history: the battle over the future of American education and the McCarthy-era hysterics that awaited postwar America.