Batman Beyond Vol. 8: The Eradication Agenda 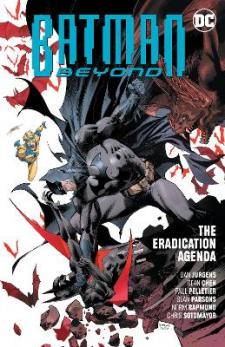 The dawn of a new Ice Age! Damian Wayne, the one true son of Batman, has returned to Neo-Gotham to share an urgent warning with Batman Beyond and his father: the League of Assassins has a new ruler! His name is Mr. Zero, and his intentions are simple: freeze the world, kill the weak, and assert the League s dominance. In order to stop Zero, Damian is going to have to bury the hatchet with Batman Beyond and Bruce. They ll also need help from Batwoman Beyond and Goliath! And it s not just the future that s in jeopardy the past and present are at risk as well! Batman Beyond will have to team up with the time-traveling hero Booster Gold to save Bruce Wayne s mind! Then someone masquerading as Batman Beyond is running around Neo-Gotham killing innocents and committing crimes. This will come to the attention of Wonder Woman, who will exact justice but Batman Beyond will have to convince her of his innocence first! All this in the series finale of Batman Beyond! The future s last stand is presented by writer Dan Jurgens (Action Comics, Superman: Lois and Clark, Generations) and artists Sean Chen (Iron Man, Wolverine) and Paul Pelletier (Aquaman, Titans). Collects Batman Beyond #43-50.