The Bear Tree and Other Stories from Cazenovia's History 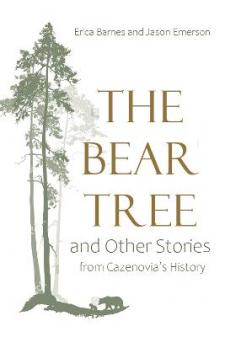 The historic lakeside village of Cazenovia in the scenic Finger Lakes region is one of the jewels of Central New York, and yet very few books have told its story. Cazenovia is a town founded by wealthy men, and much of what has been written about it has focused on the elite and the grand lakeshore mansions in which they lived. In contrast, Barnes and Emerson's new book chronicles the story of everyday Cazenovia: the fascinating people, places, and history of this 225-year-old community.

The Bear Tree and Other Stories from Cazenovia's History explores the unheralded, inaccurately told, and long-forgotten tales of the town. Readers will encounter historical characters such as elephant and lion tamer Lucia Zora Card, "The Bravest Woman in the World"; educator Susan Blow, "The Mother of American Kindergarten"; and World War I soldier Cecil Donovan, whose letters home vividly depicted the experience of war for those awaiting his return in Cazenovia.