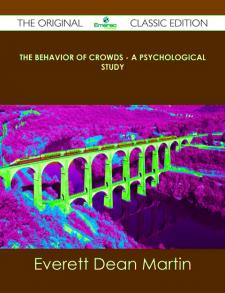 The Behavior of Crowds - A Psychological Study - The Original Classic Edition

Finally available, a high quality book of the original classic edition of The Behavior of Crowds - A Psychological Study. It was previously published by other bona fide publishers, and is now, after many years, back in print.

This is a new and freshly published edition of this culturally important work by Everett Dean Martin, which is now, at last, again available to you.

Get the PDF and EPUB NOW as well. Included in your purchase you have The Behavior of Crowds - A Psychological Study in EPUB AND PDF format to read on any tablet, eReader, desktop, laptop or smartphone simultaneous - Get it NOW.

Enjoy this classic work today. These selected paragraphs distill the contents and give you a quick look inside The Behavior of Crowds - A Psychological Study:

The most striking peculiarity presented by a psychological crowd is the following: Whoever be the individuals that compose it, however like or unlike be their mode of life, their occupations, their character or their intelligence, the fact that they have been transformed into a crowd puts them in possession of a sort of collective mind which makes them feel, think, and act in a manner quite different from that in which each individual of them would feel, think, and act were he in a state of isolation....

...23 The phenomena which we call the crowd-mind, instead of being the outgrowth of the directly social, are social only in the sense that all mental life has social significance; they are rather the result of forces hidden in the personal and unconscious psyche of the members of the crowd, forces which are merely released by social gatherings of a certain sort.