A Behavioral Theory of Elections 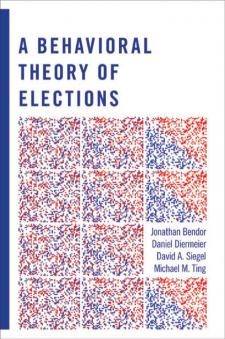 Most theories of elections assume that voters and political actors are fully rational. While these formulations produce many insights, they also generate anomalies--most famously, about turnout. The rise of behavioral economics has posed new challenges to the premise of rationality. This groundbreaking book provides a behavioral theory of elections based on the notion that all actors--politicians as well as voters--are only boundedly rational. The theory posits learning via trial and error: actions that surpass an actor's aspiration level are more likely to be used in the future, while those that fall short are less likely to be tried later. Based on this idea of adaptation, the authors construct formal models of party competition, turnout, and voters' choices of candidates. These models predict substantial turnout levels, voters sorting into parties, and winning parties adopting centrist platforms. In multiparty elections, voters are able to coordinate vote choices on majority-preferred candidates, while all candidates garner significant vote shares. Overall, the behavioral theory and its models produce macroimplications consistent with the data on elections, and they use plausible microassumptions about the cognitive capacities of politicians and voters. A computational model accompanies the book and can be used as a tool for further research.