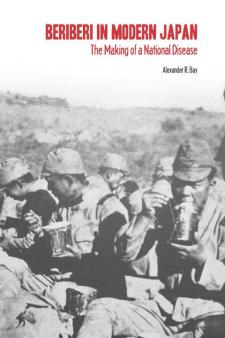 In modern Japan, beriberi (or thiamin deficiency) became a public health problem that cut across all social boundaries, afflicting even the Meiji Emperor. During an age of empire building for the Japanese nation, incidence rates in the military ranged from 30 percent in peacetime to 90 percent during war. Doctors and public health officials called beriberi a "national disease" because it festeredwithin the bodies of the people and threatened the health of the empire. Nevertheless, they could not agree over what caused the disease, attributing it to a diet deficiency or a microbe.

InBeriberi in Modern Japan, Alexander R. Bay examines the debates over the etiology of this "national disease" during the late nineteenth and early twentieth centuries. Etiological consensus came after World War I, but the struggle at the national level to direct beriberi prevention continued, peaking during wartime mobilization. War served as the context within which scientific knowledge ofberiberi and its prevention was made. The story of beriberi research is not simply about the march toward the inevitable discovery of "the beriberi vitamin," but rather the history of the role of medicine in state-making and empire-building in modern Japan.

Alexander Bay is assistant professor of history at Chapman University.