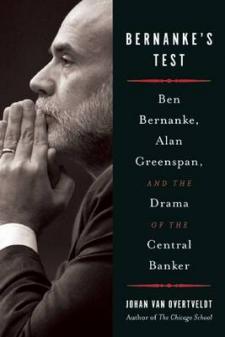 This title offers an up-to-the-minute look at the challenge facing Fed chair Ben Bernanke in trying to clean up the problems affecting the U.S. economy that he inherited from his predecessor, Alan Greenspan, informed by a historical look at how other central bankers have dealt with similar crises. The current crises facing the economy in have thrown a sharp spotlight on US Federal Reserve chairman Ben Bernanke. Each of his moves to address worsening economic conditions have been reported and analyzed at length in the press, as he works to mitigate the effects of the sub-prime lending debacle, the spiraling rise in oil prices, and the sharp increase in food costs. Bernanke is facing a stern test as America's central banker - a test created for him, in large part, by his predecessor, Alan Greenspan. In the two decades Greenspan served as Fed chair, central bankers who formerly worked as obscure bureaucrats became geopolitical megastars with international recognition. This switch can largely be identified with Greenspan, who helped guide the U.S. to new heights of prosperity, but who also bears significant responsibility for the subprime-induced credit crisis and all the related problems plaguing the economy.
But while their visibility may have changed dramatically, the underlying role played by central bankers has changed little. No one plays a bigger role in promoting those 'healthy financial conditions' than central banks, especially when it comes to price stability and the soundness of the overall financial system. The central bank also has the key power to act as lender of last resort, i.e. to 'create' money. But central bankers like Bernanke can also do much to growth and prosperity with policies that jeopardize the 'healthy financial conditions'. Deservedly, they will get the full blame for the disaster, even if sometimes others share responsibility. The consensus on Greenspan's performance as Fed chair used to be extremely positive, but more and more it's been called into question. 2008 saw Bernanke in the eye of a storm that was created largely during Greenspan's tenure. His management of the bubble of all bubbles will be a decisive factor in whether this crisis will be limited in its impact on the real economy or whether it directly leads to a major recession. This is Bernanke's Test.
In examining the challenge facing Bernanke, author Johan Van Overtveldt will look back over Alan Greenspan's long record as Fed chair, as well as Ben Bernanke's career as an economist prior to replacing Greenspan. Historical context will be provided by a look at other former Fed chairmen, such as Benjamin Strong, William McChesney Martin, Arthur Burns, and especially Greenspan's predecessor, Paul Volcker.