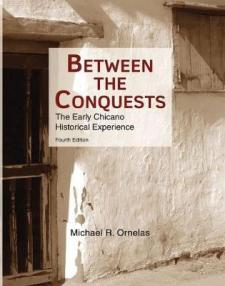 Between the Conquests: The Early Chicano Historical Experience

Since the early sixteenth century Chicanos--persons of Mexican origin living in the United States--have inhabited what is now the Southwest . They arrived with European-led explorations and settlers, and came to view the region as their new homeland. They built churches and farms, and played a vital role in the introduction and adaptation of European civilization into the region.

During the middle of the nineteenth century, the United States declared war on Mexico and acquired their ancestral lands through the Treaty of Guadalupe Hidalgo. These original inhabitants were promised unprecedented political and civil rights in the new American administration.

Between the Conquests: The Early Chicano Historical Experience is a unique collection of readings covering this early period--the span of history between the sixteenth century Spanish conquest and the United States conquest of Mexico in the Mexican American War--with a special focus on the distinctive Chicano experience. Between the Conquests includes interpretations of the unique and historical roots of one of the oldest and fastest growing populations in the United States.