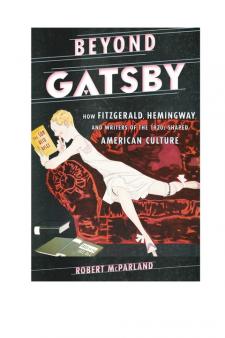 Many of the heralded writers of the 20th century—including Ernest Hemingway, John Dos Passos, F. Scott Fitzgerald, and William Faulkner—first made their mark in the 1920s, while established authors like Willa Cather and Sinclair Lewis produced some of their most important works during this period. Classic novels such as The Sun Also Rises, The Great Gatsby, Elmer Gantry, and The Sound and the Fury not only mark prodigious advances in American fiction, they show us the wonder, the struggle, and the promise of the American dream. In Beyond Gatsby: How Fitzgerald, Hemingway, and Writers of the 1920s Shaped American Culture, Robert McParland looks at the key contributions of this fertile period in literature. Rather than provide a compendium of details about major American writers, this book explores the culture that created F. Scott Fitzgerald and his literary contemporaries. The source material ranges from the minutes of reading circles and critical commentary in periodicals to the archives of writers’ works—as well as the diaries, journals, and letters of common readers. This work reveals how the nation’s fiction stimulated conversations of shared images and stories among a growing reading public. Signifying a cultural shift in the aftermath of World War I, the collective works by these authors represent what many consider to be a golden age of American literature. By examining how these authors influenced the reading habits of a generation, Beyond Gatsby enables readers to gain a deeper comprehension of how literature shapes culture.