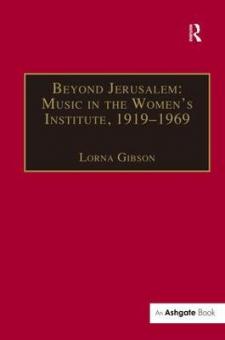 Music in the Women's Institute has become stereotyped by the ritualistic singing of Jerusalem at monthly meetings. Indeed, Jerusalem has had an important role within the organization, and provides a valuable means within which to assess the organization's relationship with women's suffrage and the importance of rurality in the Women's Institute's identity. However, this book looks beyond Jerusalem by examining the full range of music making within the organization and locates its significance within a wider historical-cultural context. The Institute's promotion of conducting - a regular part of its musical activity since the 1930s - is discussed within the context of embodying overtly feminist sentiments. Lorna Gibson concludes that a redefinition of the term 'feminism' is needed and the concept of 'gendered spheres' of conducting provides a useful means of understanding the Institute's policy. The organization's promotion of folk song is also examined and reveals the Institute's contribution to the Folk Revival, as well as providing a valuable context within which to understand the National Federation's first music commission, Ralph Vaughan Williams's Folk Songs of the Four Seasons (1950). This work, and the Institute's second commission, Malcolm Williamson's The Brilliant and the Dark (1969), are examined with the context of the organization's music policy. In addition to discussing the background to the works, issues of critical reception are addressed. The book concludes with an Epilogue about the National Society Choir (later known as the Avalon Singers), which tested the organization's commitment to amateur music making. The book is the result of meticulous work undertaken in the archives of the National Federation, the BBC Written Archives Centre, the V&A archives, the Britten-Pears Library, the Ralph Vaughan Williams Library, the Women's Library and the Newspaper Library.